Zum Inhalt springen
A band geared towards thrash connoisseurs with active minds and mean spirits, Aura Noir stand at the fore of metal’s definitive genre in an age where the underground is utterly besodden with bands. These Norwegian thrash stalwarts don’t so much tread the line between savagery and sophistication as stomp upon it, showering dirt in the faces of lesser acts with each smoldering crater of an album. 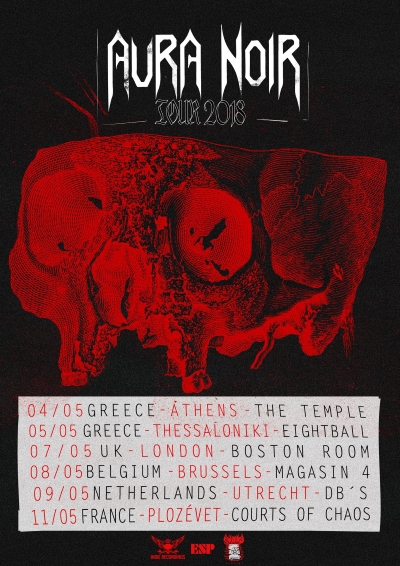 With Aura Noire, a title which quite distinctly resembles their band name, Aura Noir churns through some of the most refreshing, yet nostalgic tracks of thrash metal ever to be heard. The album opens with probably one of the most retrospect of riffs, but suddenly summersaults you into the gloriously dissonant and immersive Aura Noir atmosphere.  The soaring and burning shouts of Aggressor intensely glues the otherwise quite varied and playful guitar riffs and drums together, culminating into the essence of thrash that is Aura Noir!

In addition to the album, Aura Noir will be on their „Tour Noire“ tour from May 4 to May 11 – more info & dates below!