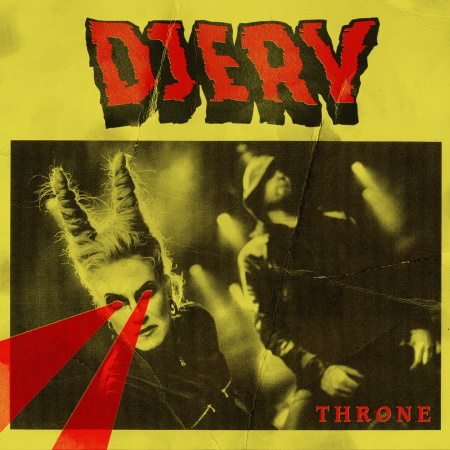 Djerv are finally back releasing their first new music in almost a decade! After some tough years for the front figure Agnete, Djerv are stronger than ever reclaiming their Throne as one of the best heavy bands out of Norway! Their new single “Throne” is out now – listen to it here https://orcd.co/throne, or watch the lyric video on YouTube. Watch Making of Throne Music Video HERE.

The single is dangerously catchy and aggressive rock, with lyrics touching upon an important subject for the band: “Throne is about fighting yourselves, your mind, and reclaiming control of your life.”

After a six-year-long hibernation, Djerv are fully recharged and ready to take off to new heights. “Throne” is carrying forward the sound of which they became known, and at the same time bridging them towards a more defined rock-sound. “We wanted to try out something a bit different, something a bit more up-tempo and simpler. Not over-thinking it too much.” Erlend (drums) states.

Lyrically the song has very different approach as it tells the story of the band´s sudden disappearance back in 2013.
“Today it`s almost impossible for me to understand how bad I felt at times,” Agnete (vocals) says. The strain of carrying two children in less than two years, combined with serious health issues sent Agnete spiraling down into deep depression, eventually landing her in the psychiatric ward. “I totally lost my footing in life, and for years I was unable to function normally. It is still a fight, and I am not fully recovered – but I know now that I will get there” she says.
“Too many people go through this, and the stigma around the disease that is depression is still all too present. So, I wanted to be open about my experience, and hopefully help others struggling to realize they are not alone. That it is not their fault, and that it can, and will get better with time. Throne is about fighting yourselves, your mind, and reclaiming control of your life. Reclaiming the Throne, and again be the ruler of your own kingdom.” Agnete comments.

The fans have been waiting patiently, welcoming Djerv warmly as the news began to spread about their live comeback last year. But the good news for their loyal fans doesn’t stop there: 2020 sees at least 3 more singles and video releases, and an album is also in the making.

“We don’t have a set release date for a new album yet. As things are now we just have to take it song by song. But that`s quite interesting and it makes it easier to focus. The task in front of you is not too unachievable, as I feel an album would be at this point. Baby steps.” Agnete smiles. “A good thing about it is that we can release music more often, which I really look forward to. It will enable us to take songs on the road faster, and people will have the chance to know them.” Erlend comments.

Live shows are also coming up for the band, and last year they returned to the stage for the first time in 6 years with successful appearances on Tons Of Rock Festival, Norway Rock Festival and Malakoff Rock Festival amongst others. Obviously 2020 festivals and club-shows are postponed but if everything goes as they hope they will be back on the road early 2021, also adding some new treats for the audience.

“I`ve decided I wanted to play some songs I wrote while in Animal Alpha.” Agnete says. “I`ve missed the music and the character I made for that band, and I can`t wait to unleash that part of me on stage again”.

The band might also perform the YouTube-hit Agnete did for the game League Of Legends; “Get Jinxed”. But first and foremost, it will be about new Djerv music and a brand-new live show.

“We want to elevate the experience we give our audience significantly. We already have too many ideas we`re playing around with, but no doubt we and the audience will have a lot of fun at Djerv shows in 2020. We want to make people dance, laugh, headbang – all in one glorified mix.” Erlend comments.

Judging by Metalhammer UK`s experience of Djerv`s last London show something good is in store. “… when a band can unleash the kind of turbo-charged thrust that would peel a layer off Kvelertak fans, and when it`s embodied by both a voice and physical presence as unique and fearless as Agnete`s, you`re blasted into the realms of revelation from the off.” Jonathan Selzer, Metalhammer UK

Djerv entered the international rock and metal-scene in 2011 with a debut record that still impress in 2020. Engineered by Daniel Bergstrand (Meshuggah, In Flames) and mixed by Matt Hyde (Deftones, No Doubt) the album received critical acclaim with 9/10 in Sweden Rock Magazine, and Rock Tribune. The metal bible Metal Hammer UK gave it a solid 8/10 and said: “Agnete Kjølsrud’s the star of the show, her vocals could take paint off your dad’s car!”

Terrorizer Magazine followed suit and said: “Djerv are onto something big with their clever combination of hard rock and black metal… A talented band that are only just getting started”

And they were right. After only two days in sale the debut album crashed into the official Norwegian sales charts at an impressive #8. They were also the highest newcomer and #3 on Norwegian Artist Charts. Spearheaded by their singles “Headstone” and “Madman” their success was immediate. During the next years the band toured heavily, amongst others with Ministry, and established themselves in the European rock and metal scene. Djerv also performed at festivals like Hellfest, Wacken, Eurosonic, Rock Hartz and Inferno to name a few. Despite the heavy touring the Djerv-universe spread outside the band itself as Agnete found time to contribute with clean-vocals on Dimmu Borgir`s most-streamed song on Spotify, «Gateways», and she did the track «Get Jinxed» for «League Of Legends», one of the biggest online games in the world. This track went on to be a viral hit currently having reached almost 90.000.000 plays on YouTube. After few appearances at summer festivals in 2019, Djerv are now ready to hit hard the European stages in 2021!